by Margi H, over 2 years ago

I have always loved Lenah Valley since I was a six year old child in 1934 and my family moved from Battery Point’s Maryville Esplanade, (name changed to Marieville quarter of a century later) to Jennings Street, (originally Redlands Avenue) New Town.  Though only halfway up the street, ours was the last house on our side;  opposite to us were two brick houses, the lower one with an orchard attached, and they were the only houses on that entire side of the street.  From the orchard, a large unfenced paddock sloped down half the length of the street to the house on the corner facing onto Pedder Street, and between the back fence of the corner house and the lower reaches of the paddock, before its upward sweep, was that joy of childhood, a perpetual frog pond.

My big brother (two years older than me) and I attended Sacred Heart School which was only a short walk from home.  Previously we had a much longer walk from Maryville Esplanade to Albuera Street School, which school I had been attending with my brother for two years.  I loved school, but I loved the holidays more, especially the long Christmas break.  Parents then had no worries that we knew of, in letting their children roam free, we had a sand pit and swings in the little park, games of cricket in the street with neighbouring children;  very few cars, cricket only held up occasionally by a passing horse and cart.

My brother and I would leave home at daybreak and be gone a’roaming all day.  We got to know everybody, all our neighbours, and enroute we would meet several of them, many quite regularly;  Percy, the assistant Grocer from Mr. Christie’s Grocery Shop on the Main Road, delivering groceries on his bike, he always brought us a large bag of chocolates when our bill was paid, and dear Clarrie, our Postman, everybody’s friend, plodding every step of his route on foot;  no motorbike had he, nor even a bicycle, but he knew everyone by name.  The milkman from the Lenah Valley Dairy with his horse and cart who often gave us a lift;  many years later I worked with a young member of his family, and she became a very dear friend.  Many an apple, pear or apricot from friendly orchardists came our way.

Clare Street had more houses, with lovely gardens, and Augusta Road more secluded homes, but in and around and all about, nothing but gorse, yellow gorse flowers, growing wild.  Giblin Street had several houses, perhaps because of the Brickhill and quarry, but elsewhere just a scattering of houses, my Aunt’s house in Doyle Avenue was surrounded by orchards.  No Calvary Hospital then, no shopping centre, but it had its own tramway line, and what fun it was to board the double decker tram from town, bound for Lenah Valley, and to ride up top, especially when the tramcar swept around the corner at the junction of the Main Road with Augusta Road, past the building with its gabled roof we thought of as the fairy tale cottage.  And after dark it was Fairyland riding so high and looking down on the lights of New Town from the heights of Lenah Valley. 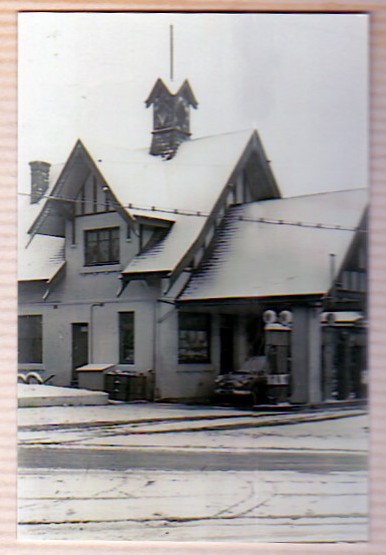 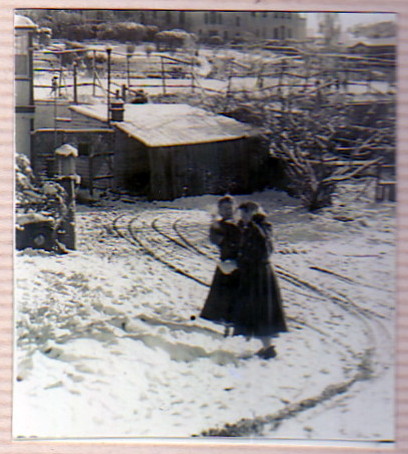 (Photos taken of our snow covered ‘fairy tale cottage’ sadly demolished to make way for another Service Station on a day in the early fifty’s when snow lay deep in Hobart and also one of my sister and myself enjoying the snow as we walked to work;  just a little late!).

There were no boundaries;  it was difficult then to know exactly where New Town merged with Lenah Valley and Kangaroo Valley, the original name of all this area, orchards thinned out the further you walked.  This was our playground all over Lenah Valley to the foothills of Kunanyi/Mt. Wellington and beyond.

We wandered far, often passing the Jane Franklin Museum, (then very much in disrepair and used mainly to store hay bales, but now beautifully restored and a pleasure to visit).  Up Lenah Valley Road and Kangaroo Valley Road following the mountain stream, past scattered houses and orchards, and a small picnic area alongside the Rivulet;  Huxley’s Tea Rooms, where years later, (1943), family and friends gathered to celebrate my brother’s eighteenth birthday, he having received his call-up that very day;  he had been an Air Force cadet at St. Virgil’s, so he joined the Australian Air Force and was immediately sent away, first to Laverton, Victoria, then to the islands north of Australia for the duration of the war.

The Lenah Valley Road gradually dwindled to a wide track which ended with a rickety gate, from where the Lenah Valley Track, very narrow, very rocky, very steep, continued to follow the widening Rivulet up stream, till it came to a ruined stone cabin which formed a junction of two tracks, the Old Hobartians Track which led upwards;  later to join the Pinnacle Road, which was in the process of being built (completed December, 1937), and another track, the Lenah Valley Track, which led away to the left and was a great favourite with us as it took us

to the New Town Falls, especially beautiful after rain; all mountain water is sweet to drink.  This track exended on to link up eventually with Pillinger’s Drive, near Fern Tree.

Many happy hours were spent with our parents on the mountain or its foothills.

Following on from the Great Depression and World War, life could be hard at times, but I have been very fortunate and mostly very happy with wonderful parents and good friends.  It took quite a few years for me to realise my ambition, but this year I celebrated my fortieth year of living in a home of my own, in the same Avenue, a few doors up from where my Aunt once lived, in lovely Lenah Valley.

Richard Hickman built Normanville in 1846 (at 39 Brushy Creek Road). The original apple sheds and...
Next story

I was born in 1966 and grew up as a child in Lenah Valley, lived on Brushy Creek road. you can se...